Does buying organic food really make a difference?
Is it worth it to invest in organic food for your family?
ABSOLUTELY!

Organically grown food is defined as food grown without pesticides, artificial fertilizers, hormones, antibiotics, or genetic modification.  The food colorings, flavorings, and preservatives in organic foods are all derived from natural sources.

Organic foods are hands down healthier than their non-organic counterparts.  Not only are they grown without harmful chemicals, but they are also more nutritious.  Organic products are the fastest growing part of the food industry in the United States.(1)

There are many important reasons to choose organic foods:

Learn why the organic choice is such an important one, not only for your health and the health of your family, but also for the health of the environment and the animals on factory farms.

The benefits of going organic... 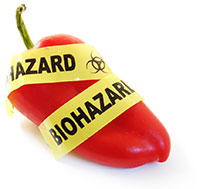 When we go to the grocery store, we may be automatically drawn to non-organic produce that is ripe, spotless, huge, and which look perfectly flawless.  Some people avoid organic produce because it does not look as "pretty" as non-organic produce.  Nor does it bruise as easily, and it lasts longer.  But there are reasons for this unnatural perfection, and they aren't good ones:

The food industry does not want you to know the truth about what you are eating, simply because you may not eat it.  A veil is created where all you are shown is the attractive "end-product" as a result of unnatural farming practices and the chemicalization of our food chain.

Switching To Organic - Can I Afford It?

Making the switch to 100% organic is tough for some families who either do not want to pay higher prices, or who are concerned about giving up their favorite foods.  Many of us cannot afford to buy all organic fruits and vegetables all the time.  It can be expensive!

But by making the switch to organic versions of just a few foods that you often eat (especially the worst offenders when it comes to heavy pesticides), you can make a significant difference to the pesticides you and your family ingest, without a big impact on your budget.

Here are some helpful tips on saving money with organics:

Look For Local Foods - Here's Why

Purchasing fruits and vegetables from local farms means that you are purchasing the freshest produce possible.  In virtually every city and rural community, there are either local farmers markets or farms that sell produce and other foods ranging from fruits and vegetables, to honey, dairy, and pasture-raised meats.  Some are open during the spring, summer, and fall, and others are open all year around.

But it is more than simply buying fresher food and supporting local farmers.  The energy required to make our food, including shipping it, driving it, flying it, refrigerating it, and processing it, requires over 100 billion gallons of oil per year.  Food processing itself consumes 16% of the energy used to make food, and can actually use up more energy than the food itself produces when we eat it.

The produce from Community Supported Agriculture (CSA) costs less than half what the same produce would cost if it was purchased in a grocery store.  Local food is not only fresher and cheaper, it also saves a significant amount of energy and resources!

In supermarket chains and health food stores, one way to recognize organic products is by how clearly the store arranges their food.  Many stores now contain a natural food section where they store the organic and GMO-free food.  When it comes to fresh produce, take a look at the product PLU code (short for "price look-up code"), which is either on the label wrapped around the produce, or on a sticker attached to it.

Unfortunately, there is no federal mandate in the US requiring that food be labeled as genetically modified, therefore the 5 digit code that begins with an 8 is rare to find.  Many Americans say they would avoid GMOs if they were labeled, therefore many seed companies do not even want farmers to know which of their seeds are genetically modified.  This means the public will find it almost impossible to distinguish GMOs from non-GMOs unless the food is organic - another reason to purchase organic!  (either that, or move to one of the 64 other countries that DO label their products as GMOs).

Currently, the USDA organic standards place no limits on heavy metal contamination in certified organic foods.  This means that organic products can contain various heavy metals, including mercury, lead, cadmium, arsenic, and aluminum.  There is also also no limit on the contamination of PCBs, BPAs, and other synthetic chemicals that are allowed in certified organic foods and supplements.