Seafood makes a long journey from the ocean to our plates.  As it passes hands from fishermen to be processed and prepared by retailers, there are many opportunities for deception, misrepresenting of origin, or disguising a lower-cost fish as an expensive one.  In the report Seafood Sticker Shock, Oceana shows just how much profit is made from seafood fraud.  Substituting lower-cost species like tilapia for the more expensive grouper could gouge consumers more than $10 for just one 8 oz. filet in a restaurant.

Seafood fraud does not just hurt consumers’ budgets.  It also helps cover up illegal, unreported, and unregulated fishing, also known as "pirate fishing," which hurts the health of our oceans.  The high profits of expensive fish fuels pirate fishing of some species that can be fraudulently labeled and sold as a legally caught or more expensive fish.  The lack of traceability on our seafood threatens fishing economies, seafood consumers, and vulnerable marine species worldwide.

Oceana launched the Seafood Fraud Campaign in May 2011 to ensure that the seafood sold in the US is safe, legally caught, and honestly labeled.  As a result of the campaign, the Safety & Fraud Enforcement for Seafood (SAFE) Act was introduced in 2012 and reintroduced in the House and Senate in 2013.  Oceana's goal for this Act is to:

Other Concerns With Our Seafood

Seafood fraud is not the only problem when it comes to seafood.  Commercial fishing practices wreak environmental havoc.  A staggering 20 billion fish caught in the course of food production each year do not even make it to our plate - they are a victim of commercial fishing practices.(1)  The National Journal estimates that 20% of all fish caught by fisheries is classed as "by-catch" (swept up in massive trawling nets by "accident" and then discarded).(2)

First, let's check out some serious health (especially heavy metal) and environmental consequences as a result of how we farm fish today.  Then, let's become educated on the how to purchase seafood with the LOWEST RISK of contamination, as well as making sure our choices are environmentally responsible.

Mercury and heavy metals are being added to the oceans at alarming rates.  Adding mercury to the ocean at even low concentrations has a massive effect on the final concentration of mercury in fish due to tropic feeding.  Pregnant women or childbearing women should be especially careful of eating fish such as tuna, swordfish, and other species that may contain mercury or other contaminants.

With our technology, we can now fish anywhere, at any depth, and any species.  But instead of large predators, we now focus on much smaller fish, which imbalances the food chain for the larger prey.  Poorer countries rely almost entirely on fish to meet basic food needs, and because of our over-fishing, these countries are being seriously hurt with few alternatives for relief.  All because of our greed for fish.

We now have a 90% decline in top predators.  75% of the ocean fisheries are either at their limits or are over-fished, yet the government uses taxpayer money to subsidize the fishing industry and build more fishing ships.  On a global scale, these subsidies run up to $50 billion/yr, subsidies that are completely unnecessary.

Some birds and mammals that depend on fish have declined as over-fishing depletes their food source:

These declines are accelerating, with such creatures now considered endangered species.

Fish farming in fish pens causes an increased occurrence of contaminated seafood as they are all cramped together in a disease-ridden environment.  Excretion and defecation by fish contained in shoreline pens add nitrogen and phosphorus to the ocean that stimulates the growth of phytoplankton, and eventually leads to anoxic (no oxygen) bottom waters.
Damaging & destructive fishing methods... 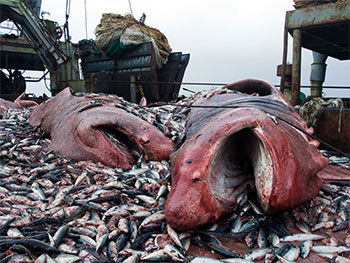 The incidental damage caused by fishing is a substantial (and tragic) problem:

Trawling & Dredging
Bottom trawling and dredging are considered the most damaging.  Nets with weights are dragged over the ocean floor, and over 70% of the catch is thrown back into the water (after it has been maimed, hurt, or destroyed).  The amount of the ocean floor that is destroyed by trawling affects an area 150 times greater than the global area of forests cut down each year.

Cyanide Fishing
Cyanide fishing is a method of collecting live fish involving spraying a sodium cyanide mixture into coral reefs in order to stun the fish.  The affected fish are incapacitated, some floating to the surface and some sinking to the bottom.  Some of the ones scooped up survive the initial poisoning, while the rest die.  The corals reefs themselves are also damaged.  Almost 80% of marine aquarium fish sold internationally comes from the Philippines, most of which are caught using cyanide fishing.

Dynamite Fishing
Dynamite fishing destroys the coral and obliterates the fish.  A single blast can destroy thousands of years of coral growth.  It stuns, injures, and kills fish due to the immense pressure caused by the detonation.  Some fish will float to the surface where they are scooped out.

Longline Fishing
Longline fishing has thousands of baited hooks stretching over 100 miles long.  These lines are left in the ocean for 1-2 days.  The hooks sometimes catch swordfish, tuna, sharks, sea birds (albatross diving for food), and turtles, that are thrown dead back into the water.

Chemical Runoff from Agriculture to Ocean (Dead Zones)
Nitrogen fertilizer application has dramatically increased over the past 20 years with serious consequences as it enters streams, lakes, and coastal oceans.  This increased load creates exceptionally large algae growth that eventually dies and sinks to the bottom of the ocean.  It then becomes a food source for bacteria, which consumes the oxygen and creates near zero oxygen levels (hypoxic) or zero oxygen levels (anoxic) in the bottom waters.  In these areas, a "dead zone" is created.

Very large dead zones now exist as a result of fertilizer usage (e.g. the Gulf of Mexico).  No organism requiring oxygen can survive in these zones.

Protect Yourself & the Environment

Only choose sustainably caught seafood.  Sustainable wild fisheries are environmentally responsible and ethical in their practices.  They monitor population control and only catch species that are plentiful.

In addition, avoid or severely limit your intake of fish known to contain higher levels of heavy metals.  These fish include tuna, shark, or swordfish.  Some health food stores certify some species of fish to be free of mercury contamination.   Thanks to the Monterey Bay Aquarium Seafood Watch, we have a very helpful guide when it comes to what seafood we should choose, and what we should avoid.

Thanks to the pocket guides created by the Monterey Bay Aquarium, it's now much easier to make safer and more environmentally conscious seafood choices when you are on the go... right from your smartphone.  Download the app for android, iPhone, or iPod touch: