Calling yourself an American has always been something to be proud of, something to fight for.  After all, America is a world superpower.  We take for granted the freedom, security, and lifestyle that living in America offers, a lifestyle that is desired by millions worldwide.

But there is a cold, hard reality that has become impossible to ignore any longer.  In the harsh light of today, Americans are depressed, overweight, over-medicated, and either suffer from or have family and friends who suffer from at least one chronic disease.  Autoimmune conditions are skyrocketing.  Each year, the cost of our healthcare increases, while the quality of our health steadily decreases.  The irony is that we are a 1st. world country that spends the most on healthcare, yet we are BY FAR the sickest. 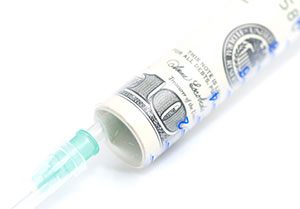 In the US, healthcare is almost entirely about profit.  Unlike in other countries where the aim of the medical field is to promote healing, in America, profit drives the bottom line, not the health of the American people.  Americans are experiencing an epidemic in the rates of chronic disease.  Lack of healthcare coverage has nothing to do with causing this disease, and expanding coverage will not cure it.

The healthcare industry is about selling solutions that completely obscure the big part they play in the problem (see why medical mistakes and medication side effects are a leading cause of death in the US).  And when we do receive medical care, we are fed medications to treat symptoms, and given little education on understanding the root cause of our illness.  Using a pill-popping approach to health care in no way contributes to a healthy body.

The pharmaceutical giants are not in the business of reducing profits.  There is no money to be made from healthy people.  If they can continue to convince people that the solution to health lies not in their eating and lifestyle habits, but instead is about access to drugs and surgery, they will happily watch Americans spend massive sums of money on healthcare with nothing but escalating chronic disease to show for it.

How can it be that the biggest killers are so easily preventable through diet and stress management, and yet the government does not promote public education on either subject?  Billions in profit will suddenly disappear if we have a country full of healthy, happy people.  Not only that, but If you take away the medications, then doctors would be forced to focus on natural solutions and lifestyle changes to reverse disease.  This would involve an overhaul of the entire medical curriculum that knows little to nothing on the subject of diet and nutrition, and much more about pharmaceutical drugs and surgeries.

To be fair to doctors, they are limited by the constraints of the educational system that trained them, which lacks focus on chronic disease cause and prevention.  In fact, when patients ask their doctor about the root cause of their autoimmune disease, or cancer, many doctors are at a loss for answers.  The many correlations between diet and stress, and illnesses are not part of their educational curriculum.

Natural healthcare practitioners such as Naturopaths, Traditional Chinese Doctors, and Ayurvedic practitioners understand the true cause of disease and will never recommend synthetic drugs (many with toxic and dangerous side effects) to band-aid a health issue.

The medical industry has coerced the public into relying on drugs to treat health problems.  With the exception of some short-term benefits that we can get from using these drugs, relying on them is very rarely a solution.  These drugs do not fix the problem; they treat symptoms.  At best, they should be used as an adjunct to a healthy diet and lifestyle changes, and as your health improves, be slowly and steadily reduced and eliminated under the guidance of a natural healthcare practitioner.

How the US became a medicated nation...

Most diseases are nutritionally controllable diseases.   Unless we recognize the fundamental relationship between our highly chemicalized food chain, the toxic nature of many medications, and our ill health, things will continue to get worse before they get better.  Unless Americans demand the government be held responsible, rather than turn a blind eye to corporate greed at the expense of the American taxpayer, we will pay with not only our health, but ultimately, with our shortened lives by eating the toxic standard American diet.

Insured Or Not, Many Can't Afford Deductibles

For those in the US who have medical insurance, premiums are steadily rising.  Deductibles and copays have become substantial, with outpatient surgeries for something as routine as removing a kidney stone running up to $10,000 or more.  Insurance may cover the bill, but with a 10% typical copay, the out-of-pocket expense is $1,000.  Common gastrointestinal surgeries can easily run in excess of $30,000 for the doctor, anesthesiologist, hospital, food, and other medical expenses involved - that is a $3,000 copay (in addition to the high monthly premium).

Many people are now walking way from scheduled surgeries because they simply cannot afford the copays.  Prescription drugs are on an alarming rise, and some cancer drugs cost $30,000/mth. with the weak promise of extending life by days or weeks.

The More We Spend On Healthcare, the Sicker We Get

Of the 27 industrialized countries, the World Health Organization (WHO) ranked the US 33rd. in terms of life expectancy, far behind countries such as Japan, Switzerland, Singapore, Australia, Sweden, New Zealand, Greece, and others.  Despite the fact that the US spends the highest amount of its economy on healthcare, it ranks very poorly.  Diabetes and cancer are epidemics that are on the increase, and childhood obesity is now considered the norm.

In the US, children are sicker and suffer far more childhood illnesses than other children worldwide (and coincidentally are the most over-vaccinated, receiving a whopping 69 doses of 16 vaccines before the age of 6 yrs. old).

The more we spend on healthcare, the worse the health statistics of the population.  In the US, where there are more doctors per population and more money spent on healthcare, there is also a correlation of a lower life expectancy score.  Americans currently pay about twice as much per capita on healthcare compared to other advanced nations, yet our health is no better.(1)

WHO has set 12 different criteria for healthy life expectancy, and found there is a direct correlation between the countries that are more dependent on medications and those that have lower life expectancies and quality of life.  A significant contributing factor is the secondary diseases that result from using modern pharmaceuticals and their very toxic side effects (drugs for cancer, cholesterol, diabetes, and blood pressure being among the worst).

It has become acceptable to die in a hospital after invasive, aggressive, and often futile medical care that financially destroys families.

How is it possible that we spend the most per capita of any other country in the world for medical care, yet rank so low in terms of quality of health?  How is it that the US has a life expectancy of around 77 years, the same as Cuba, and yet Cuba spends next to nothing on healthcare?