Soy Today - Not A Health Food!

The Soy of Traditional Cultures 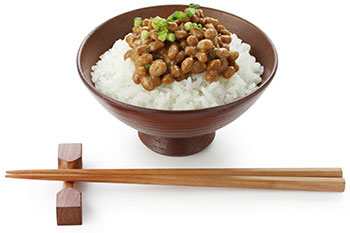 Soy (also known as soya in some regions of the world) was originally used in Asia as a green manure rather than as a food crop, until methods of aging and fermenting were developed.  With the advent of fermentation, the soybean was fermented to increase its digestibility by breaking down the proteins and starches.

Soybeans were first cooked, and then spores of mold added.  They were left to ferment for 3 days before being mixed with salt and water, and left to ferment for many months.  The final fermented product was very flavorful, and very different from its original whole bean form.  This fermented product was used to create foods such as miso, soy sauce, tamari, and natto.

Why were soybeans fermented?  Because the fermentation process increases its digestibility, making it a more nutrient-rich food:

In China, soy milk was the first step in the process of making tofu.  Soybeans were slowly boiled in water to eliminate any toxins, and a curdling agent was added to create curds.  The curds would then be pressed to make tofu, with the whey discarded as it was considered to contain anti-nutrients.  Soy formulas for infants was never used in Asia.  It was invented by a pediatrician in Baltimore in 1909.

In the Japanese culture, soy was not consumed as the highly processed product and in the massive quantities it is consumed today in the western world.  It was also never used as a replacement for animal foods.  Soy was eaten in very small amounts that Americans today would consider a condiment.  If not fermented, the whole soybean was boiled, bearing no resemblance at all to the highly processed soy sludge in supermarkets today that is injected into almost every food group, ranging from frozen meals and cereals, to being used as fake meat and cheese in vegetarian and vegan products.

Christopher Dawson, owner of Clearspring (a maker of organic soy sauces and other products), lived in Japan for 18 years and his Japanese wife is a cooking teacher.  Dawson stated "I never saw soybeans on the table in Japan - they are considered indigestible."

You may think that a "skinny soy latte" is a healthy choice, but think again.  It is not, no matter what savvy advertising and pretty pictures tell you.  The processed soy of today is nothing like the healthy food used traditionally by eastern cultures.  Soy sauce, miso, and other fermented soy products no longer undergo the lengthy fermentation process to render them more digestible.  Manufacturers instead begin with a de-fatted soy protein meal, made as a result of the industrial crushing process.  The raw beans are broken down to thin flakes, which are then percolated with a petroleum-based hexane solvent to extract the soybean oil.  The remains of the flakes are toasted and ground into a protein meal, much of which is now used in our processed and refined food chain, as well as for pet food and in animal feed.

Similarly, soy flour is bleached and deodorized (to remove the smell of the oil).  The lecithin that forms during the oil storage used to be discarded as a waste product, but is now used as a food emulsifier in thousands of foods.

Many cheap-grade soy sauces are no longer brewed, but rather are made in 2 days.  De-fatted soy flour is mixed at high temperatures and under pressure with hydrochloric acid to create hydrolyzed vegetable protein.  Salt, caramel, chemical preservatives, and artificial flavorings are then added to create a "semblance" of color and taste.  This rapid method of hydrolysis uses an enzyme as a reactor to create the unnatural form of glutamate found in MSG.

Soy is everywhere in our food supply.   Whether you realize it or not, any time you eat processed food and pre-packaged meals you are likely eating soy or a soy derivative as it is now in the majority of processed American foods.  Most of it is genetically modified, which alone poses a health hazard.  Studies conducted outside of the US have clearly demonstrated that genetically modifying food can contribute to serious health conditions.  Many experts feel that GMOs are linked to the skyrocketing increase in chronic food allergies experienced by millions today.

In an effort to emulate the food and dairy items that have been omitted from their diet, many vegetarian and vegan foods contain very large amounts of processed soy.

Soybean oil is now used by many manufacturers in an endless variety of foods, including ice cream, mayo, margarine, vegan butter, deep fried foods, chips, cookies, and pre-packaged meals.  It is high in omega 6 fatty acids, and a contributing factor to our imbalance of omega-6 to omega-3.  As a hydrogenated oil, it is used to deep-fry fast foods.

Soy In Agricultural
Soy is now used as "cheap feed" in chicken, beef, dairy, pig, and fish farming.  This is not a biologically appropriate food for farm animals, and is as unhealthy for them as it is for us.

Soy In Pet Food
Soy and soy derivatives are found in many dog and cat foods as a cheap substitute for meat.  As with farm animals, it is not a biologically appropriate food.

Unfortunately, processed soy derivatives are very well-hidden on many labels, appearing under popular terms such as:

Want to know how you can avoid purchasing processed soy?  It's simple!  Eat fresh foods, and when you purchase anything in a package, make sure that you recognize every single ingredient item as a natural food, cold pressed/unrefined oil, or herb.

Soy Today Is NOT A Healthy Food! 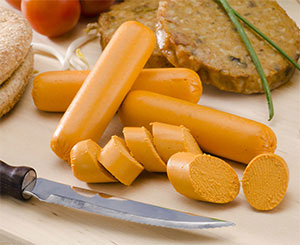 Today's processed soy is not a healthy food.  Nor does it magically cure disease.  It is shocking that some health professional still recommend it in the diet.

Soy consumption has exploded in the American diet as food manufacturers have rushed to capitalize on the sale of soy-based products.  Cleverly deceptive marketing techniques cover food packages with false health claims and pictures of healthy, active people enjoying soy products.  The term "heart healthy" is slapped on many of them.  Exploiting soy for profit is big business.  The food industry has spent millions to convince consumers that soy products are part of the new, healthy food revolution by blazing ridiculous health claims.

Unfortunately for the general consumer, the advertising has paid off.  The irony is that those most concerned about a healthy diet are heavily targeted into believing soy is a healthy food.  Many people assume that because soy products appear all over their local health food store (especially in diet, vegetarian, and vegan foods), it must be a health food.

Studies, some of which are funded by the soy industry itself, promote soy's ability to lower disease risk.  The original thought was that the reason rates of heart disease and certain cancers are lower in east Asian populations may be due to the soy in their diets, and that the estrogens in soy might have health benefits.  But epidemiological studies have shown this assumption to be completely incorrect.  The historic soy consumption in both China and Japan is tiny compared to the massive amounts of processed soy foods, shakes, coffees, and snacks Americans are consuming.  Not only that, but it was only eaten in the form of fermented foods, not in the form eaten in the US today.  Just as important, it was never genetically modified.

The concern over the dangers of soy are so significant that foreign governments and multiple agencies worldwide have issued warnings against it, including:

There are many reasons that certain cancers are lower among Asian populations, including their high consumption of sea vegetables and fish, for example.  But it is definitely not associated with a diet high in processed soy.  It is also sobering to note that as Americanized processed foods fill the food shelves of Asian markets, so do westernized diseases begin to appear that were never present before.

Contrary to what some assume, the compound in soy that resembles B12 cannot be assimilated by the human body.

Learn more about vitamin B12 & how to prevent a deficiency:
The Body Healer Protocol...

A Healthy Approach to Soy

Despite what the food industry has done to soy today, eating good old-fashioned unprocessed soybeans and/or fermented soy in small quantities can be healthy.  Follow these tips next time you head out to purchase a soy product:

If possible, always choose organic soy.  If not, the likelihood of it being genetically modified is extremely high.  Not only that, it will have increased levels of pesticides and other toxins.  But regardless of whether it is organic or GMO, it should be eaten in very small quantities.  This is especially so if has not been fermented.

With the clear evidence of the dangers of consuming today's processed and GMO junk soy products, the health risks of consuming processed soy far outweigh any health benefits.