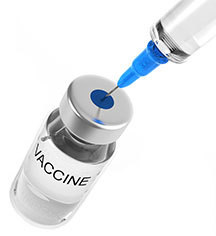 Ever since vaccinations were introduced 200 years ago, they have become a very controversial topic, with arguments both for and against them.

Both sides offer compelling arguments and both points are valid.  But regardless of the viewpoint, vaccinations are an important advance in human health.

We owe it to our children to look into anything they are exposed to, whether it be eaten, played with, or injected.  Children are dependent on parents to make educated choices for them when they cannot do it themselves.

In a day and age where our food chain is heavily contaminated with unnatural and toxic ingredients, and the average American is over-medicated and suffering from a variety of chronic disease, we can't just blindly trust authority figures and our government to tell us what's best for our health.  Clearly, that approach has failed us miserably.

The FDA:  Failure to protect the food chain...

Unfortunately, the government has been less than forthcoming about the risks, largely because of the powerful pharmaceutical lobbyists in Washington.  When it comes to vaccinating your children, make the decision based on knowledge, and thoroughly research both the pros and cons of the vaccine before deciding to move forward.

Making an educated decision on vaccinations...

35 years ago, 7 vaccines were given to infants and children.  Today, children who follow the schedule recommended for the CDC receive 69 doses of 16 vaccines by the time they have reached 6 yrs old, the highest amount given in any country worldwide.

As if 16 vaccinations isn't enough, the pharmaceutical giants have 145 new vaccines in development and want to make them all mandatory.  Billions in profit are riding on them.

A child’s immune system continues to develop and strengthen long after birth.  Because of this, other countries strongly disagree with the US vaccination schedule when it comes to infants under 2 years of age, believing it is not strong enough to withstand such an overload without health consequences.

The longer you wait, the more likely your child’s immune system will be strong enough to handle the onslaught with minimal damage.

A titer test is a simple blood test that shows whether your body still holds antibodies from the first vaccination, making re-vaccination unnecessary.  They are available at many doctors' offices, and can drastically reduce the amount of re-vaccinations necessary.  Titer tests are medically valid documents at schools and child daycare facilities.

Titer tests are also common at veterinary clinics (and standard procedure at Naturopathic veterinary clinics), and they are valid at daycare and boarding facilities.  Many pet owners are told by their vets that their dogs and cats need the combo shot for distemper, parvo, and other illnesses, yet titer tests show that antibodies in many pets are still high enough to not require any re-vaccination for up to 6-7 years after the initial shot.   This makes the current vaccination schedule highly questionable.  The test ranges from $50-$100 and should be performed every 2-3 years.

It has been 4 years since our pup received her shot combo, and her antibodies are still going strong based on her recent titer tests.  We strongly recommend taking a titer before considering ANY re-vaccination.

In 1986, Congress recognized that vaccines may have the ability to injure and kill children, and passed the National Vaccine Injury Act.  This action was in response to a large number of lawsuits filed, claiming vaccines were causing adverse reactions, including brain damage and death.

The act was created for two reasons:

Hundreds of thousands of adverse reactions to vaccines have been report to the federal government.  Since 1988, the government has awarded over $2 billion in payouts to more than 1,300 families whose children suffered brain damage from vaccines.

Vaccines are a massive business.  Today, companies like Merck bring in billions by manufacturing vaccines for everything from chicken pox, to the flu.  Three major vaccination manufacturers made the Fortune 500 list in 2011:

The federal government is the largest buyer of vaccines in the country, administering these vaccines through government-funded public immunization programs that provide millions of vaccines to babies, adults and pets each year.(1)

The vaccine controversy results from the government’s power to not inform the public of the serious risks associated with vaccines today.  This prevents parents from making a much more informed decision, and being able to carefully weigh the benefits against the risk.  Vaccines are pharmaceutical products that do carry risks of injury or death, no matter how small.  They affect each person differently, and parents deserve to be given truthful and unbiased information about both the disease and the vaccine.

Chronic health problems, along with the realization that the right to information is being denied, is causing a growing number of parents and concerned individuals to demand that questions about safety and appropriateness be addressed.

While most people are aware that there may be vaccine side effects, they believe them to be rare and inconsequential compared to the benefit of disease prevention.  In other words, they believe that the benefit of saving millions of lives from disease epidemics by mass vaccination outweighs the assumed rare incidence of death by vaccine.  But there is mounting evidence that this is not the case.

Vaccinations may actually be contributing to the increase in chronic disease today, and there is a serious question as to their safety.  The problem is that the symptoms and reactions are not always immediate.  In looking at the long-term health of those who were vaccinated against those who were not vaccinated, we are beginning to see disturbing correlations.

In the US, our children are the most highly vaccinated children in the world, and they are among the most chronically ill and disabled.

Whether you have to vaccinate depends largely on what state you live in.  For up-to-date state laws on vaccination, visit the National Vaccine Information Center.

Depending on the state you live in, vaccine exemptions are permitted for various reasons:

See above.  Titer tests are medically valid documents in all states within the US.
Philosophical/personal belief exemption...

The religious exemption is granted based on the First Amendment of the Constitution, which is the right to freely exercise your religion.

All states allow a medical exemption to vaccination.  Proof of medical exemption must take the form of a signed statement by a Medical Doctor (MD) or Doctor of Osteopathy (DO) stating that the administering of one or more vaccines would be detrimental to the health of an individual.

The medical exemption is common in individuals suffering from serious chronic diseases such as cancer.

But regardless of the laws in your state, if there is a "compelling State interest," such as the spread of a specific communicable disease, the vaccine exemption may not be valid for that vaccine, as not administering it may threaten the welfare of society as a whole.

Some of the ingredients in vaccines are highly toxic and can cause severe neurological damage and autoimmune conditions - they may also be the primary reason for some of the vaccine injuries suffered.