Oriental medicine, also known as traditional Chinese medicine (TCM) is a complete system of healthcare dating back over 3,000 years.  References to Chinese medicine dates back to the Han Dynasty in the ancient Chinese medical text "Huang Di Nei Jing" (The Yellow Emperor's Classic of Internal Medicine), originating between approximately 300 and 100 BC.

Oriental Medicine encompasses 4 pillars, some of which are used in combination to help return the body to a state of balance: 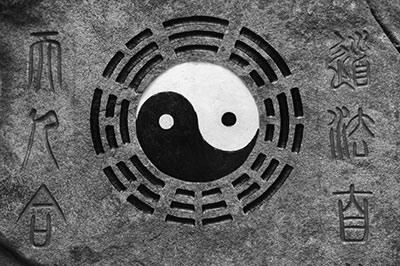 Acupuncture is the most extensively studied branch of Oriental medicine, which research has shown to be effective in treating a wide variety of medical conditions.  It is especially effective in pain management.

Oriental medicine recognizes that the body, mind, and spirit are intimately connected to the world in which we live, and that Qi (see below) flows throughout all living things.  The balance or imbalance of Qi determines our state of health, and the goal of Oriental medicine is to achieve and maintain this balance.

Practitioners use several different methods to determine which treatment to use, and sometimes more than one treatment is recommended (e.g. Chinese herbs along with acupuncture).

A Natural & Non-Invasive Approach to Health

When the loosening of political ties in the 1970's opened communication between China and the rest of the world, Oriental medicine began to grow in popularity in the west.  With steadily increasing concerns about the state of healthcare in the US and the dangerous side effects of traditional medications and therapies, more and more people began turning towards a more natural and holistic approach to healthcare.

The growing cost of healthcare within the US has also becoming a significant factor in the resurgence of not only Oriental medicine, but natural therapies in general.  Today, Oriental medicine is much more widespread, and most major health insurance providers at least partially cover the cost of Oriental medicine therapies.

Let's take a look at the diagnostic methods used in Oriental medicine:

A central philosophy of Oriental medicine is to live in harmony with the natural order of life.  The concept of Yin and Yang is based on the balance between two equal and opposite principles in order to maintain that harmony.  Both are interdependent, meaning that one cannot exist without the other.

Yin means “the shady side of the mountain,” and represents the slow or passive principles of life, such as darkness, inertia, quietness, and coldness.  Yin organs of the body include the liver, spleen, heart, lungs, and kidneys.  Yin characterizes the feminine nature of things.

Yang means “the sunny side of the mountain,” and represents the hot, excited, and active principles of life, such as activity, light, noise, and heat.  Yang organs of the body include the gall bladder, stomach, bladder, and small and large intestines.  Yang characterizes the masculine nature of things.

Yin and Yang are considered all of the equal and opposite pairs that interplay in our lives, such as the moon and the sun, female and male, dark and bright, cold and hot, passive and active, etc.

Different foods are related to either Yin or Yang.  Only natural foods should be eaten, foods that balance the Yin and Yang of the body.  Different regions of the body also have Yin or Yang associations.

There are 4 states of imbalance:

During diagnosis, an Oriental medicine practitioner will conduct an extensive examination, and also physically observe the balance of Yin and Yang expressed by the patient.  For example, fidgeting and hyperactivity is characteristic of excessive yang (or deficient yin), whereas an inhibited patient who is very quiet with a soft voice would be characteristic of excessive yin (or deficient yang).

An imbalance of either Yin or Yang leads to a blockage in the flow of oxygen and vital energy throughout the body.  Blockages, sluggishness, as well as any excess results in various health conditions.

In Oriental medicine, everything in the Universe (including ourselves) is governed by 5 natural elements that relate to both the physical body and the world around us:

This underlies the principle that all things are interconnected, as opposed to the traditional approach of westernized medicine of a separation between mind and body.  These 5 elements interact with one another, therefore if one is out of balance, it can cause another to also become imbalanced.

During a treatment, an Oriental medicine practitioner will ask many questions about both diet and lifestyle to discover the balance of these elements within the body.

In Oriental medicine, 8 guiding principles are used as a diagnostic method to analyze patterns of distress.  These principles consist of 4 pairs of opposites (totaling eight):

Interior / Exterior
This principle is used to determine the location of a condition.

Excess / Deficiency
This principle is used to determine the strength of an illness.  A deficiency is indicated by a lack, e.g. a lack of energy, lack of fluids, or lack of a required nutrient. Excess is indicated by too much of something.

Yin / Yang
This principle is a generalization of the former three principles, and helps determine if a condition can be categorized as being primarily Yin or Yang.  Chronic illness is seen as Yin, whereas an acute condition is seen as Yang.

Used in conjunction with the 5 element and Yin/Yang diagnostic methods, these principles help provide a complete picture of the state of the patient and help the practitioner determine how to approach treatment.

Qi:  Flow of Energy?  Or Flow of Oxygen?

We commonly hear the phrase today that "acupuncture stimulates the flow of energy in energy meridians throughout the body."  A principle of Oriental medicine is that all disease stems from an imbalance of Qi flowing throughout the 12 vessels of the body.  There are various points along these vessels where the flow is closest to the surface.  These points are called acupoints, and are stimulated using acupuncture and acupressure.

But let's take a look at how a simple mistranslation led to confusion of what Qi actually is.

Earlier this century, a French monk named Georges Soulie de Morant lived in China from 1901 to 1917.  During his stay, he became very interested in Chinese medicine and decided to translate the original Huang Di Nei Jing text, despite having no medical training, nor any training in the ancient Chinese language.  Morant's translation is the one we are all familiar with today, and is the source for all of the textbooks used in western schools of Chinese medicine.

Translation of Qi - Oxygen
Although Morant translated "Qi" as energy, the concept of Qi in China does not resemble the western concept of "energy."  In the original texts, the term "da qi" refers to "great air," which translates to oxygen.  Qi is defined as air, or the essence of air.  It does not mean energy.  The Chinese knew that there was something in the air we breathe that is essential to life, and that something in the air circulated throughout the body in the blood.  At the time of the original text, the term "oxygen" had not yet been defined.  Today, the closest translation of Qi is not energy, it is oxygen.

Acupuncture promotes oxygen flow throughout the blood vessels, rather than promotes energy flow through the meridians.  But in reality, the mistranslation makes little difference when we consider the result, because at the end of the day, the result is the same.  When the flow of oxygen throughout the body is increased in areas where it is stagnant, healing occurs.  There is no disagreement on this point between conventional western medicine doctors and Chinese medicine practitioners.

But stimulating the flow of oxygen does also increase the flow of "vital energy" throughout the body.  Vital energy is a subtle energy that is the life force that exists in every living creature.  When our bodies are well-oxygenated, we naturally vibrate at a higher frequency.  There is some disagreement on whether this was part of the definition of "great air."

The Chinese understood that the nodes along the blood vessels represent areas of fine vascular structures and nerves.  Medical research has confirmed that neurovascular nodes (that correspond to acupuncture points) contain a high concentration of sensory fibers, fine blood vessels, fine lymphatic vessels, and mast cells.  These nodes are distributed along pathways of the body where blood vessels supply blood to the capillaries and fine vessels.  These nodes and pathways correspond to the vessels in the original Chinese medical texts.

Acupuncturists assess the quality of the blood flow by feeling for a special pulse.

Visiting A Practitioner - What To Expect

During a treatment, the practitioner will ask many questions to discover the cause of our health condition, including information on current health, medications being taken, emotional health including any stress or anxiety, and lifestyle factors.  They will use the above diagnostic principles to determine which treatment(s) to be the most appropriate.  Often, practitioners will prescribe herbs, specific foods, and acupuncture appointments to bring the body back into a state of balance.

Oriental medicine is considered a complete system of medicine and its complexity requires many years of training to master.  Within the US, there are two institutions that regulate the licensing and accreditation of Oriental medicine practitioners:

NCCAOM®
The National Certification Commission for Acupuncture & Oriental Medicine (NCCAOM) is a non-profit organization established to ensure entry-level competency in the practice of Acupuncture & Oriental Medicine (AOM) through professional certification.  All NCCAOM certification programs are currently accredited by the National Commission for Certification Agencies (NCCA).  Each state has its own laws and requirements (view state-by-state requirements).

ACAOM
Ask if your practitioner has completed their education at an educational facility accredited by The Accreditation Commission for Acupuncture & Oriental Medicine (ACAOM).  The ACAOM is the national accrediting agency recognized by the US Dept. of Education for the accreditation of master's level certificate and diploma programs and post-graduate doctoral programs in acupuncture and Oriental medicine (DAOM).