Originally, before the advent of pesticides, antibiotics, hormones, and chemical fertilizers, the foods we ate were inherently organic.  Large-scale farming with chemicals did not begin until food processing and industrialization took off around the time of World War II.  Today, large-scale farming heavily relies on dangerous chemicals to grow produce, rather than working with the natural cycles of the earth.

Modern agriculture and its chemical methods have contributed to the depletion of much of the essential minerals and nutrients of the world's soils.  Our vegetables, fruits, and food items grown are not only deficient in important nutrients that used to be present in much higher amounts, but they are also filled with chemical pollutants (agrochemicals) that contribute to chronic disease in both humans and animals.

There is a direct correlation between the skyrocketing rates of cancer, diabetes, heart disease, obesity, autism, and the industrialization of our food.  Pesticides are now present in almost all commercial produce, and when we consume them, we are consuming toxins.  They put a heavy burden on the immune system and the elimination organs (the liver and kidneys) that must work overtime to excrete these toxic substances.  When we overload them on a continual basis, they cannot keep pace.  The toxins begin to build in our bodies, and we succumb to disease.  The result is a steady increase in liver and kidney disease.

Although most people associate pesticides as something that only kills insects, it is a very broad term that includes:

Under US law, a pesticide is also any substance or mixture of substances intended for use as a plant regulator, defoliant, or desiccant.

*  Antibacterial & antimicrobial soaps and cleaning products contain chemicals such as triclosan that are harmful.  They contribute to lowered immunity in children and an increase in allergies, asthma, and other health conditions by interfering with how our immune system learns from and responds to its environment.  Of course, it is important to maintain basic sanitary habits such as washing our hands after going to the bathroom and keeping our homes clean, but our unhealthy obsession with germs and the constant sanitization by scouring, bleaching, disinfecting, scrubbing, and spraying dangerous chemicals around our household is dangerous for our health.

See why you should rarely use antibacterial products and why hot soapy water is just as effective in the Body Healer protocol.

Why We Use Them 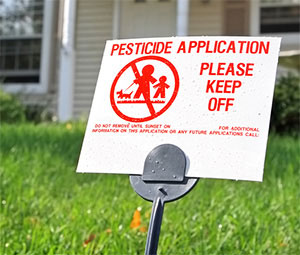 Whether on our food or in home and garden products, pesticides and herbicides were created to help us deal with unwanted pests such as harmful insects, arachnids (e.g., spiders, ticks, and lice), rodents, weeds, and microorganisms such as bacteria and viruses.

While many insects and animals play are an important part in our environment, they can sometimes be responsible for the heavy destruction of farm produce.  Some carry diseases, while others can fatally bite or sting.  Insect infestations in our home or garden can be particularly bothersome and we often resort to insecticides to control them.

When it comes to pests invading our home, we definitely need to have a product of choice.  There are several much safer options on the market that are just as effective, yet nowhere near as toxic as the common ones we see today.  Examples include the Ecosmart brand, which kills various pests, and is available from many stores including Walmart and Amazon (and the product our family uses for seasonal ants).  The smell of the essential oils is quite strong, but not unpleasant.

There are also other brands that make use of an assortment of essential oils that are extremely effective at insect control.  These oils come from plants that have been grown throughout the world in gardens to repel pests.

Learn more about the dangers of household cleaners &
how to build your own non-toxic cleaning cabinet:
The Body Healer Protocol... 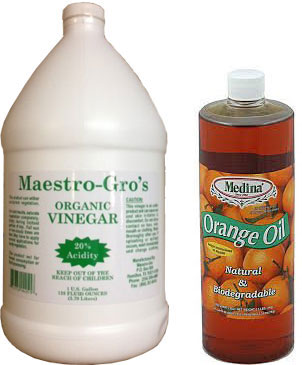 One of the best weed control methods available is using a combination of 20% horticultural vinegar mixed with a small quantity of orange oil and dish detergent.  All of these products can be found online (20% vinegar can also be found at many farm supply stores) and they are safe and non-toxic when it comes to pets and children.

This wonderful recipe comes from the Dirt Doctor, a website dedicated to natural and ecosafe gardening methods:

Simply mix the ingredients together in the vinegar bottle and pour into a garden spray container.  It is important to use horticultural vinegar as it contains 20% acetic acid.  Household vinegar contains a much weaker percentage - usually 5% - and is not strong enough to kill most weeds.  After application, weeds will begin to die within 4-6 hours.

This weed control method has many positive reviews (on Amazon alone, reviewers gave it 4.5 out of 5 stars based on over 75 reviews), with many claiming that it does a better job than Roundup when it comes to some of the more invasive and difficult to control weeds.

In Our Food Chain & Environment - Pesticides Are Everywhere

Because of the widespread use of agricultural chemicals in food production, we are exposed to pesticides through just about every outlet you can think of, from our cleaning supplies, to personal care products, the water we drink, the food we eat, and in the environment.  Pesticide applicators, farmers and farm workers, and communities near farms are most at risk.  Golf courses also use pesticides heavily, so do many schools and parks.

The pesticide "atrazine" was found in 94% of US drinking water tested by the USDA.  Studies by the CDC show that all of us carry pesticides in our bodies.

They may be considered useful in controlling pests, weeds, and insects, but pesticides can cause serious harm to animals, the environment, and humans.

Just how hazardous are pesticides to our health and the health of our pets?  They are very hazardous (...Read why).   Pesticides are designed to kill, or to have a detrimental effect on life.  When we ingest foods containing them, they in turn have a detrimental impact on our health.  We do not notice the immediate effects because we are eating very small quantities that accumulate over long periods of time.  But this does not mean they are not impacting us - it simply means that the toxic build-up over time can result in the future development of chronic conditions.

Studies have conclusively shown that pesticides in our food are linked to:

Many pesticides for insect and weed control have been formulated to be effective on contact.  Some are harmful if breathed in or eaten, and some are lethal.  Unfortunately, whatever is lethal to a pest or a weed will usually cause adverse reactions in human adults, and more severe and sometimes very dangerous reactions in children and pets.  The risk factor to our health is determined by how much we are exposed to it and how toxic it is.  The use of toxic pesticides on lawns can increase a dog's chance of developing canine lymphoma 2-fold.

There are 3 ways we become exposed to pesticides:

We can reduce our exposure by being extremely careful when handling these products, and always wearing rubber-lined glove and facemasks to protect us from fumes.  But the real danger is the hidden toxicity, and the ability of pesticides to damage the systems and organs of our bodies over time with persistent use.

Acute toxicity is often expressed as flu-like symptoms, or a nervous system disorder.

Chronic toxicity is the potential long term impact from repeated exposure to small amounts of a toxin (such as household cleaners) over time, which studies are now revealing have the potential to causes various forms of cancer, reproductive problems, birth defects, autism, and other serious conditions with prolonged usage.

To protect your family, your pets, and your home from these dangerous chemicals, use other natural options and use the more toxic solutions ONLY as a very last resort.  If you do choose to use a pesticide, use it very carefully, and select the least toxic product that will control the problem.

Learn how fun and rewarding it can be to create a much healthier and safer environment for your loved ones - furry friends included!

Learn more about transforming your home into a healthy haven:
The Body Healer Protocol...

The Hidden Costs of Chemical Dependence

Industrial agriculture is exhausting the natural resources on which we all depend.  It makes us sick and undermines the world's capacity to feed itself healthy food.  A chemicalized food chain is the definition of unsustainable:

Livestock farming is the single largest contributor to water pollution (and destructive fishing methods, the largest contributor to the degradation of our coral reefs).  Each year, we also lose 25 million acres of cropland.  Industrial agriculture uses 70% of the planet's fresh water, and according to the EPA, US agriculture contributes to nearly 75% of all water-quality problems in the nation’s rivers and streams.

The agricultural sector is responsible for 18% of the greenhouse gas emissions, higher than the emissions produced by public transportation.  It accounts for 37% of methane, which is largely produced by the digestive system of animals (and is 23 times the global warming potential of CO2, and 64% of ammonia (which contributes significantly to acid rain).

Agriculture also produces 65% of the nitrous oxide from stored, applied, and deposited manure.

Industrial agriculture is the largest single threat to biodiversity, and 7 in 10 biologists believe that today's biodiversity collapse poses an even greater threat to humanity than climate change.  Bees, butterflies, bats, amphibians, and other beneficial species are dying off, and their declines are linked directly to pesticide exposure.

The plummeting bee populations due to highly toxic bee-killing pesticides has had a disastrous impact on our crops.  Bees play a critical role in our food system.  Nearly 1/3 of our crops - including vegetables, fruits, nuts, and seeds - depend on bees for pollination.  Across the US, bee colonies are collapsing and scientists are pointing their finger squarely at pesticides as the cause.

While farm workers and their families, rural communities, and children are on the "front-lines" of industrial agriculture, we all carry pesticides in our bodies.

Pesticide exposure undermines public health by increasing the risk of many chronic and autoimmune diseases, and nervous system disorders such as Parkinson's, multiple sclerosis, and Alzheimer's disease.

Pesticides are sprayed heavily on food crops, with 37% of pesticides produced used in agriculture.  A single bushel of corn eaten by cattle has been treated with over 1 gallon of oil-based fertilizers.
GMOs...

The original promise of GMOs to reduce pesticidal use has resulted in the exact opposite.  Weeds and insects have adapted to create "superweeds" and pesticide-resistant insects, dramatically increasing both the amount of pesticides needed, and the development of increasingly toxic pesticides to control these new strains.

According to Dave Mortensen, Ph.D., professor of Weed & Applied Plant Ecology at Penn State University, 800,000 million more pounds of these newer and highly toxic pesticides will be used in farming as a result of the failure of GMOs.

The 8 myths of GMOs

A chemicalized approach to our food production is not sustainable for the long term.  Farmers, politicians, and consumers are finally beginning to see through the false promise of "industrial farming can feed the world."

We do not need pesticides to grow food, or to feed the world.  Organic farmers in the US produced more than $20 billion worth of pesticide-free food in 2007, and at a 20% annual growth rate, organics are the fastest growing agricultural sector.  Organic and other non-industrial farming systems are more than capable of feeding every person on earth with far greater resource efficiency and far less destruction to our environment.

Change will take time as the politics of agriculture and agricultural lobbyists are very powerful forces.  A handful of corporations currently control our food supply and their agenda is profit at the direct expense of health.  But luckily, the tide has already began to turn and the natural health movement is gaining momentum at a rapid and unstoppable pace.  Join the movement and be a part of the change you want to see in the world!