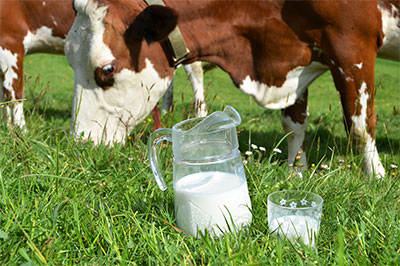 Raw milk is milk that comes straight from a cow, goat, or sheep, and that has not been altered or heated.  It is the milk our parents, grandparents, and great grandparents drank for centuries past, delivered fresh by the milkman directly to our homes as little as 30 years ago.

Many different civilizations throughout history used large amounts of raw butter, milk, cream, and cheese, and maintained a very high standard of health, comparatively free from the high cholesterol and cardiovascular problems of today, even through to old age.

Dairy Then vs. Now

Today, dairy is a very different story.  It is:

The subject of raw milk can make some people irrational, but the irony is that many people do not realize that there is absolutely nothing healthy about today's pasteurized dairy.

Luckily, the demand for unpasteurized milk is steadily growing among consumers concerned about eating healthy and uncontaminated dairy.  In the following states, raw milk can be legally sold from supermarkets and other retail stores, or purchased directly from farms:

For an up-to-date, state-by-state list, check out Farm to Consumer to determine the law for your state.  Visit your local health food store for unpasteurized dairy sources and do not hesitate to ask about local reputable farms that may also provide raw milk and cheese products.  Farmers markets are also a great source of information.

When milk is in its raw form, it contains important enzymes that help the body predigest the proteins in the milk.  These enzymes and carrier proteins ensure all nutrients are absorbed, and the friendly bacteria in the milk also helps us digest the protein and nutrient content.  Because raw milk contains its own enzymes, very little energy is required to digest it.

Both the bacteria and enzymes are destroyed during the heat of pasteurization.  The enzyme "lipase" which helps us predigest and metabolize dairy fat is also destroyed during pasteurization, and an important study revealed that those who are overweight are often deficient in this enzyme.  The study concluded that obesity and abnormal cholesterol deposits are significantly impacted by eating fats that are deficient in lipase, which is only found in raw, fatty foods (both plant-based and animal-based).  There is something in raw milk and raw butter that negates high cholesterol, and evidence points to lipase as the missing link.

Is Dairy Bad for Us?

The answer is both yes and no.

Various traditional cultures around the globe subsisted largely on these products and suffered none of the health issues suffered today.  In some diets such as in mountainous villages throughout Switzerland, raw milk, butter, cheese, and cream formed a large part of the traditional diet.  Both children and adults had none of the chronic health conditions, nor the dental deformities that plague children in the US today.  Dental health and jaw structure is directly related to the quality of the diet both during pregnancy, and that is fed to infants and children.

Was this the same quality of dairy today?  No, not at all.  Their foods were naturally organic and free of all the chemicals, pesticides, hormones, antibiotics, genetic modifications, and other dangerous elements in our dairy today.  Their cows and sheep were definitely not fed unnatural GMO corn or soy products.  In the US, unless you have access to raw milk and cheese from a reputable source, cutting out dairy is a great idea.  Not because pasteurized dairy is inherently bad for you, but because it is no longer the same healthful product after it has undergone commercialization.

Why Milk Is Best Drank By Infants

For many Americans, milk is not easily digested after childhood.  Infants produce rennin and lactase up to the age of 3, both of which help break down the casein (protein) and lactose (milk sugar) in cow's milk.  After the age of 3, the body no longer produces these enzymes because milk is no longer required by the body.  This is why milk is called "the perfect first food."

For many, milk causes the body to produce mucus.  As our body attempts to digest the milk protein, it increases mucous production as a form of respiratory elimination.  A reaction to dairy is not always apparent until it is  removed from the diet completely for a period of 2 weeks and the body's sensitivity is reset.  Once reintroduced, we often immediately experience mucus in the back of the throat that feels like a postnasal drip.

When it comes to feeding infants, always choose to breast feed.  If health complications prevent breast feeding, choose raw milk from a reputable source as the next best alternative.  Pasteurized milk is never a healthy choice for newborns.  If your pediatrician freely advocates pasteurized milk, then they are unaware of the many health studies showing the negative health impact on newborns from drinking pasteurized milk products.

Why babies should not be fed pasteurized milk...

Soy milk is not an option as it is dangerous for infants due to the phytoestrogen content, to the extent that governments of several countries have either issued a ban against feeding soy milk to infants, or issued health warnings.  ...Read more about infants and soy milk.