Chronic disease is rare in populations that do not consume refined, processed foods, of which sugar is a major component.  These populations eat foods high in healthy carbohydrates and natural sugars from whole foods such as fruits, vegetables, unrefined grains, and legumes.

Even though both the Department of Agriculture and the American Heart Association advises us to cut down on our sugar intake, and studies have linked refined sugar intake directly to heart disease, the Sugar Association itself has decided to lay the blame squarely on the shoulders of the public.  In a prepared statement, it claimed:

"We are confident that the American people are perfectly capable of choosing what foods to eat without stark regulations and unreasonable bans imposed upon them."

The fact that sugar is added to foods that shouldn't contain sugar to begin with, and that it appears under many deceptive names on food labels, appears irrelevant.

A recent Harvard study revealed that sugar-sweetened beverages are linked to more than 180,000 obesity-related deaths worldwide each year.  Let's look at 6 other sugar studies:

In a study conducted in the Netherlands, two groups of albino rats were equally divided between male and female with 44 in each group.  Both groups were fed a human type cooked diet with a small quantity of fresh vegetables and bananas.  One group was fed table sugar, replacing potato bread.  The rats who were 3 weeks old at the start of the experiment lived on the diet for 364 days and began to die off.  All died at 819 days.  Those receiving table sugar had their lives shortened by 15% for males, and 5% for females.  However, all developed severe kidney disease, the males sooner.  It is also well established that kidney disease is common in rats that are fed a cooked diet where the diet is lacking food enzymes destroyed by the cooking process.(1)

In a study of 75 rats, those consuming a diet high in sucrose had a shorter life span and higher blood pressure.  The majority of these rats showed enlarged hearts and pleural effusions (fluid buildup in the lungs and chest).  The study concluded that a diet high in sucrose produced higher blood pressure with earlier congestive heart failure, and was partly responsible for the shortened life span.(2)
#3 - Heart disease...

Over the course of a 15-year study, participants who took in 25% or more of their daily calories as sugar were more than twice as likely to die from heart disease as those whose diets included less than 10% added sugar.  Overall, the odds of dying from heart disease rose in tandem with the percentage of added sugar in the diet—and that was true regardless of a person’s age, sex, physical activity level, and body-mass index.(3)
#4 - Atherosclerosis...

Studies show consistent adverse effects of sugar consumption on HDL and triglyceride levels, which could accelerate atherosclerosis.  It may worsen diabetes control, and the combination of sugar with protein and fats promotes the formation of dangerous substances and cancer-causing agents such as AGE's.(4)

In another study, pigs were fed a high-sugar diet.  68 out of 80 pigs developed heart disease in the left half of their heart.  But when 10% of the sugar was replaced with coconut oil or beef tallow (two items high in saturated fats), the heart remained free of the endocarditis.(5)
#6 - Insulin resistance...

Michael Pagliassotti, a Colorado State University biochemist who did many of the relevant animal studies in the late 1990's, says that fatty liver and insulin resistance can happen in as little as a week if the animals are fed sugar in huge amounts of 60 or 70% of diet calories.  It can take several months if the animals are fed something closer to what humans actually consume (20% of diet calories in sugar).  In both cases, when excess sugar was removed, both the fatty liver and insulin resistance quickly disappeared.

Similar effects were seen in humans.  When fed the equivalent sugar intake of 8-10 cans of Coke or Pepsi each day, the liver would begin to become insulin-resistant and triglycerides rose in just a few days.  As with the rats, the same effects would appear with lower doses, it would just take longer (over a month) to occur.(6)

In 2009, Dr. Robert Lustig gave a lecture that has now been viewed by millions of people on You Tube.  The 90-minute discussion is called "Sugar:  The Bitter Truth."  Lustig is a specialist on pediatric hormone disorders and a leading expert in childhood obesity at the University of California, San Francisco School of Medicine.  Lustig concluded that, similar to alcohol and tobacco, refined sugar is a toxin.  He also concluded that it is not the calories in refined sugar that pose the problem - it is the sugar itself.

Words such as "insulin" and "diabetes" and "hypoglycemia" have become household terms since diabetes has become a health epidemic.  Sugar intake is blamed as the primary culprit, but most of us do not understand why, nor do we fully understand what these words actually mean.  Let's take a look at some definitions and learn what parts sugar and insulin play in diabetes.

Blood sugar is released by glands within a part of the body called the endocrine system.  This system influences the functioning of our entire body, and produces hormones that control the release of blood sugar.  It is crucial in regulating our growth and development, healthy cellular growth and function, metabolism, sexual, and reproductive health.

Two hormones called "insulin" and "glucagon" help keep blood sugar balanced after a meal and make sure there is enough to supply the fuel we need to maintain our energy level.  It is important that the amount of glucose in our bloodstream is maintained at a constant level.  Both insulin and glucagon are secreted by the pancreas.

The blood sugar spikes and crashes, and eventually, the pancreas can no longer keep up with the demand for insulin and blood sugar rises out of control, spilling over into the urine.  The body cannot make enough insulin to keep the blood glucose at normal levels, and we may then be diagnosed with type 2 diabetes, one of the top 5 killers in the US.

Not everyone who is insulin resistant becomes a diabetic.  But having chronically elevated insulin levels can result is higher triglyceride levels and blood pressure, lower levels of HDL cholesterol (the “good cholesterol”), and weight gain.  Collectively, these symptoms are known as metabolic syndrome (also known as Insulin Resistance Syndrome).  Metabolic syndrome is a major risk factor for both heart disease and diabetes (meaning that if you have this risk factor, you are more likely to suffer from heart disease or diabetes).  The CDC now estimates that some 75 million Americans have metabolic syndrome.

With type 1 diabetes, the pancreas is unable to produce any insulin and individuals must rely on daily injections of insulin to help keep their blood sugar from rising too high.  Type 1 diabetes (previously known as "'juvenile-onset diabetes"), develops in childhood or early adulthood. 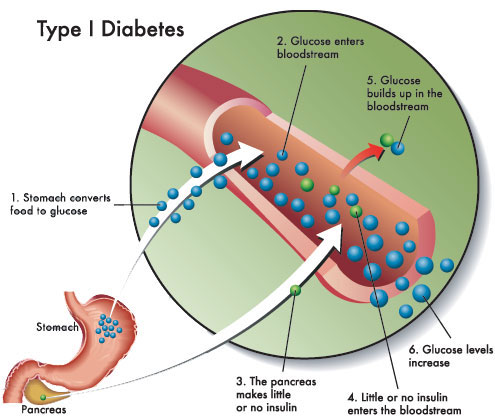 The flip side of diabetes is hypoglycemia.  Here, the pancreas overreacts to the concentrated sugar and releases too much insulin.  Blood sugar levels rapidly fall far below normal levels, creating symptoms of fatigue, headaches, depression, and irritability.  After a quick "sugar fix" the symptoms magically disappear... until the next time.  The cycle continues, and the spikes and crashes of refined and highly concentrated sugars contribute to hypoglycemia.

Frequently, the pancreas wears out over time from the over-stimulation, and hypoglycemia can turn into diabetes.

So, what causes the initial insulin resistance?  Studies show that a likely cause is the accumulation of fat in the liver as there is a direct correlation between liver fat and insulin resistance.  Excess sugar consumption can lead to increased fat production in the liver and the development of diabetes.(7)  People who eat high amounts of sugar have a higher level of fat in their blood than people who eat no refined sugar, which contributes to plaque build-up in the arteries and hardening of the arteries.

In a healthy body, we digest sugars and they pass through the intestines and into the bloodstream.  They are then moved out of the bloodstream and into the cells of organs and tissues to provide fuel for the body (and the brain, which uses glucose as its primary fuel).   But when we eat a high fat diet, the sugar remain in the bloodstream longer than it should as it is processed much more slowly. Let's see how:

Those who follow a high fat diet will always carry a high quantity of fat in the bloodstream.  This means that blood sugar levels remain chronically elevated for sustained periods of time. Such eating habits lay the foundation for conditions such as candida, diabetes, chronic fatigue, and brain fog.

Candidiasis is a relatively common health condition caused by an overgrowth of a type of yeast called candida albicans.  It can be caused by a variety of different factors ranging from eating processed foods, to taking medications such as antibiotics, birth control pills, or other hormones.  This condition is especially common in women.

Candida is naturally occurring in the body, and it consumes sugar for food.  The size of the candida colony in the blood is determined by its food supply.  When blood sugar levels are normal, so too is the candida colony in the blood.  The sugar we eat is distributed throughout the body and metabolized for energy, and any excess yeast quickly dies off.

The candida functions as a backup mechanism for insulin, and helps bring down the blood sugar to normal levels.  This is especially important if the pancreas is compromised.  As we can see, candida plays an important role in our health, and we do not want to completely destroy it.

Contrary to what some may think, it is not fruit consumption, or the sugars found in natural foods, that causes the candida overgrowth.  Fruit is not the root cause of the problem, and avoiding fruit will not address this root cause.  However, once you have candidiasis, sugar does make the situation worse. This is why treating candidiasis involves eliminating foods high in sugars and fats from the diet for a short period of time.

As the yeast thrives off sugar, until you have cleared your body of candidiasis, you need to be especially careful about what you eat, which means starving the excess yeast. We do this by:

Luckily, candida is a short-lived organism.  By following this regimen, the yeast population returns to normal often within a week and the body re-balances itself.  This may not immediately resolve any underlying issues related to the functioning of the pancreas or adrenals, but by cleaning up our diet, we significantly improve the problem.

By reducing the fat in their diet to low levels of healthy fats from whole foods, many diabetics resolve their condition and no longer require any diabetes-related medications.

Do you suffer from either diabetes or candidiasis?
Heal yourself naturally in 30 days or less.