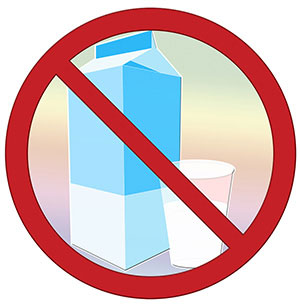 The milk and dairy today on the supermarket shelves is far from the healthy, traditional dairy products eaten over centuries past.  Today, it is homogenized, pasteurized, comes from factory-farmed cows fed unnatural diets of GMOs, and if it is not organic, typically contains antibiotic and pesticide residue.

In an attempt to force cows into increased milk production, the milk industry also began the widespread use of genetically engineered "bovine growth hormone," also known as BST.  Both the European Union and Canada have banned the use of BST due to associated health risks.

Raw dairy was a staple product many traditional cultures worldwide that suffered none of the health issues we experience today.  These cultures were robust and strong, and lived well into old age without the bone-related conditions synonymous with old age in our industrialized western world.  As you will see, there is a direct correlation between pasteurized dairy and bone-related diseases such as osteoporosis.

Learn about the diets of traditional cultures...

What Exactly Is Pasteurization?

Pasteurized milk products have been heated at high temperatures for a specific length of time to kill most microorganisms living within it.  Pasteurization is named after the 19th-century French scientist Louis Pasteur, who published "The Germ Theory of Disease."

The two most common types of pasteurization in the US are:

The biggest claim for requiring milk to be pasteurized is to kill bacteria.  But like irradiated foods, pasteurized foods give us a false sense of security.  If food is contaminated, irradiation and pasteurization can kill the contamination.  Many meat and dairy products are contaminated as a result of unsanitary and highly questionable factory-farming practices.  Animals are abused and kept in filthy conditions, and the only way they can remain disease-free is to pump them with a continual stream of antibiotics (up to 80% of antibiotics in the US is used by the agricultural industry).

Instead of addressing sanitation issues and abolishing the use of medicated additives, irradiation and pasteurization covers up the problem and serves as a convenient excuse to not shape up and clean up the food production environment.  Milk producers can now be less careful about high standards of cleanliness - why bother if you are going to pasteurize or irradiate it?  Over the past 20 years, Organic Pastures in California has produced millions of gallons of raw milk and experienced not one reported illness, whereas pasteurized milk products have generated at least 19 product recalls.

Breast milk itself is definitely not sterile and free of bacteria - far from it.  Breast milk is very high in pathogens.  But the bioactive components in "raw" breast milk assist the baby in developing a strong immunity for life to protect against any pathogens they comes in contact with.  Should we expect health experts to begin demanding that breast milk be pasteurized?

The only time cow's milk should ever be drank is if it comes from pasture-raised (free-range) cows at an organic facility that has high standards of cleanliness.  This means that the cows are eating their natural food source (rather than highly processed GMO products), and it also means that there are no antibiotics or other chemicals present in the milk.

Unpasteurized (raw) milk is always best.  Read on to find out why.

What Pasteurization Does to Milk

Pasteurization heats the milk to a temperature that causes the milk to undergo significant changes.  Beneficial bacteria, nutrients, and enzymes are destroyed, including ingredients that are natural protectors of the milk and help our bodies predigest the milk proteins.  This is why some people are unable to properly digest pasteurized milk, and yet have no problem digesting raw milk.

There is a significant difference between breast milk, raw milk, and pasteurized milk.  Let's compare the three and see what these differences are:

Now let's take a look at the damaging effects of pasteurized products when it comes to our bodies:

Unfortunately, pasteurization is now only one of many concerns.  In today's industrialized food chain, dairy and milk products not only contain pasteurized milk, but they are also filled with all sorts of undesirables such as processed sugars, artificial colors and flavors, and a variety of unpronounceable chemicals.  It is hard to justify anything good about them at all, except that the containers look bright and pretty...  Milk-based drinks are a primary cause of mucus build-up in children.

According to the FDA, health benefits claimed by raw milk advocates "do not exist."  This is in spite of very evidence to the contrary that shoes the opposite:  Health issues result from drinking pasteurized milk.  Government agencies and the dairy industry are heavily biased against raw dairy, while providing incomplete facts or erroneous statistics about the healthful properties of pasteurized milk products.

Contrary to what the milk industry will have you believe, pasteurized dairy does not prevent osteoporosis or bones fractures at all.  In fact, it does the opposite.

Countries with the highest milk and dairy intake also have the highest incidences of osteoporosis and bone-related disease.  For every study showing pasteurized foods fortified and enriched with synthetic vitamins are good for you, more show they are bad.  But there is 100% definitive proof that pasteurization damages dairy products and our ability to digest them, and destroys the calcium content.  Common sense tells us that adding this nutrient back in artificial form to an already damaged food can not be healthy.

Children suffer from more dental issues, ranging from cavities to crooked teeth requiring braces, than ever before.  The supply of calcium a child needs to assist in the growing of healthy teeth, bones, and jaw structure comes from the quality of mom's food before birth and baby's food after birth.  When a diet is deficient, or  foods are denatured (such as when drinking pasteurized milk products), bones do not develop as they should, nor do teeth.

It is important to note that the dairy we are talking about in these studies is PASTEURIZED dairy.  Many traditional cultures worldwide consumed meat, fish, and raw dairy with none of the health issues and bone related diseases we experience today.  Some of these cultures lived to 100 and more, suffering none of the diseases we associate today with old age.  Knowing this, we should look less towards the animal foods being a culprit, and more towards what we do to it before we eat it.

More studies on the health benefits of raw dairy...

In an FDA PowerPoint presentation warning against raw milk,(9) 15 studies were cited.  In all 15 studies:

Unpasteurized dairy is not more dangerous to consume than pasteurized dairy.  Every study vilifying milk for outbreaks has been misquoted and unable to prove that pasteurization of that same milk could have prevented the outbreak.

The FDA:  Failure to protect on a mass scale...

Consider this comparison of raw vs. pasteurized milk in California, where raw milk is legal:

Could raw milk become contaminated due to unclean practices, or because of how the milk is handled on the way to the consumer?  Of course!  The same could be said of any food.  This is the reason why we have had more recalls of pasteurized milk than raw milk.  We only need to look at the serious consequences of trusting government agencies to understand how questionable food handling practices and a lack of quality control can fatally contaminate our food.

Raw (unpasteurized) cheese is now available in every major grocery chain across the country, with some natural food stores carrying a significant selection from all around the world.  Raw milk is also available in several states throughout the US, including:

For an up-to-date state-by-state list, check out Farm to Consumer to determine your state law.

Raw dairy & why you should choose it...